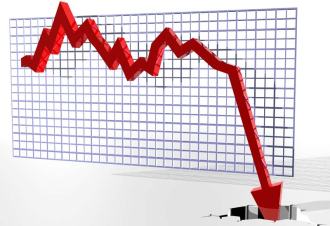 This month, Statistics New Zealand has begun releasing key data from the 2013 Census. A wealth of information is already available online, with all the details being rolled out between now and June 2015. I especially enjoyed ‘What if New Zealand were a village of 100 people?’

Of course, we all know what they say about lies, damned lies and statistics, and the story of a nation can never be reduced to mere Census figures. But statistics do have their place. As Jed Bartlet once said, “Numbers, Mrs. Landingham. If you want to convince me of something, show me numbers.”

Obviously, my main interest in the Census data is what it tells us about religion and spirituality in my adopted home. For anyone who’s been following the trends over recent years, there are few surprises here. But it’s still fascinating to look over the numbers, and to reflect on what it tells us about the spiritual state of New Zealand in 2013.

So let’s start by looking back at the nation’s recent history, to get a feel for the trends that have been developing. (Disclaimer: I am no statistician. While all these figures are based on information published by Statistics New Zealand, and I’ve done my best to be accurate, I can’t guarantee that all these figures are 100% correct.)

The first table shows the number of respondents in each of the three previous censuses (1996, 2001 and 2006) alongside the percentage of total responses.

I’ll leave you to digest those figures and analyse most of those trends for yourself. But far and away the most obvious – and, for me, the most important – statistics are the numbers identifying as ‘Christian’ and as ‘No Religion’.

As recently as 1996, a strong majority of Kiwis still identified as Christian. Bible-believing Christians might want to point out that many of those 2,143,995 people from 1996 were ‘Christian’ in name only – a nominal description, perhaps indicating some loose connection to a mainline denomination rather than any personal faith in Jesus Christ as Saviour and Lord. But still, there was a vast gap between that 63% and the next most common category of ‘No Religion’, coming in at 25.5%.

But since then, that gap has been steadily closing. As the number (and the percentage) of ‘Christian’ people declined, so the number of ‘No Religion’ people has been increasing. By 2006, the gap had closed to less than 20% of total responses.

So what do the numbers from 2013 show? Well, you probably don’t have to be a statistician or a prophet to see this coming. Let’s remove the 1996 figures and add in the most recent data.

Again, there are plenty of interesting patterns worth noting – the sharp rise in Sikh repondents, the steady increase in Hindu, Muslim and (to a lesser extent) Buddhist respondents, and the slight decline in ‘New Age’ respondents, to name a few. But again, what should really catch our eye are the top two lines.

For a little comparison, the most recent Census figures from Australia (2011) revealed the following:

And remember, while there are plenty of nominals among the ‘Christian’ respondents, there is no such thing as a nominal when it comes to No Religion. When you tick that box, you mean it.

If we turn the last four Censuses into a simple graph, it looks like this: 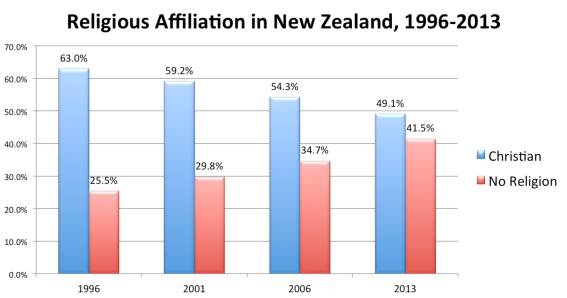 At this point, it doesn’t take a genius to see where the trends are heading. Barring a large-scale change of course, New Zealand’s next Census will see ‘No Religion’ overtake ‘Christian’ as the nation’s dominant ‘belief system’.

What does it all mean, and how should Christians respond? Let’s come back to that question in a moment. But first, we’ll look at the data on several of the mainline Christian denominations. Again, let’s begin with some recent history.

Before you look at the statistics for 2013, take a second to predict what will happen. Now look below and test your powers of prediction. It’s really not that hard, is it?

Anglicanism in New Zealand is taking on water at an alarming rate. Tragically, the ship is sinking.

Almost 100,000 fewer people identify as Anglican in 2013, compared to 2006. In the last 17 years, the percentage of people self-identifying as Anglican has dropped from not much under 20% to not much over 10% of the population. I’ll come back to this later.

Meanwhile, the Presbyterian / Congregational / Reformed trinity isn’t faring much better. Methodism is also in decline. Interestingly, though, Roman Catholicism has remained relatively steady, and the percentage of people self-identifying as simply ‘Christian’ has held strong. I won’t comment on Pentecostalism – partly because of my uncertainty about the figures (see footnote 6), and partly because I’d define ‘Pentecostal’ less denominationally and more theologically (so I suspect lots of people in other denominations are actually what I’d call Pentecostal in their belief and/or practice). All I’d say is that I’m a little surprised it hasn’t grown more (or at all).

Here’s another graph to capture what’s going on. 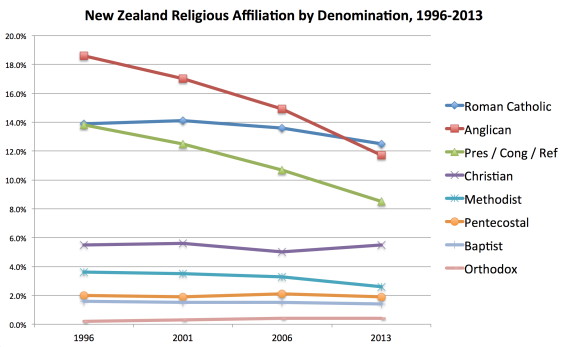 Given the overall decline of Christianity and the ascendancy of ‘No Religion’, the denominational stats are not exactly a revelation. But they’re fascinating (and, for some, confronting) reading nonetheless.

So what does it all mean? How should Christians respond to the spiritual lay of the land as we look around this great nation? I’ll post some initial thoughts later, but would love to hear any reflections in the meantime.

[3] Statistics New Zealand refers to this as ‘Christian nfd [not further defined]’. For the record, though I’m an ordained Anglican minister (and a reformed evangelical!), this is how my family and I self-identify on Census forms.

[5] Statistics New Zealand refers to this as ‘Christian nfd [not further defined]’. For the record, though I’m an ordained Anglican minister (and a reformed evangelical!), this is how my family and I self-identify on Census forms.

[6] The Statistics New Zealand website says, “Of the largest religions, Catholic, Anglican, and Presbyterian all decreased, while Hindu, Islam, and Pentecostal increased” (emphasis added). As helpfully pointed out by William Chong (@wchong), the figures for ‘Pentecostal nfd’ (not further defined) increased from 36,372 in 2006 to 45,777 in 2013. However, when all Pentecostal denominations (eg: Assemblies of God, Elim) are combined, the figures in the table are obtained. Apologies for any confusion.