Skip to content
HomeThe (Temporary) Triumph of Secularism: Religion in New Zealand at the dawn of the 2020s

The inevitable has happened: the number of people with ‘No Religion’ in New Zealand now far exceeds the number of Christians. We are officially one of the most godless nations on earth.

This is hardly breaking news—because I’m a bit late to the Census data party, but also because Visually Impaired Freddy could have seen this coming for years, if not decades. It was only a matter of time.

The 2018 Census[1] records no fewer than 2.26m people (48.6% of the population) as saying they have ‘No Religion’. As I’ve pointed out before, there are no nominals in the No Religion category. Meanwhile, the number identifying as Christian continues to plummet, with just 1.74m (38.3%) ticking this box. And let’s face facts: the overwhelming majority of those people would be ‘Christian’ in name only, lacking a saving trust in the Lord Jesus Christ.

Here, in the form of several graphs (along with the odd extra note or editorial comment), are the key findings from the most recent Census (with figures going back to 2001 to help us see the trends).

While we all knew that ‘No Religion’ would become New Zealand’s dominant ‘belief’ in this Census, it’s more of a blowout than expected. Growth from 1.63m to 2.26m is clearly a very pleasing result for the secularists. That’s 629,000 more people (in a small country) in the space of five years.

Christians, meanwhile, look on in sadness and despair as Western society rushes to saw off the collective Christian branch that we’re sitting on—a branch that has richly blessed and shaped us. Much more importantly, we are abandoning the God who made us. Our numbers have dropped from 1.86m to 1.74m—a drop of just 120,000 people, but almost exactly 10% less of our growing population.

In fact, so complete is No Religion’s victory (if we can call it that) that it now claims more adherents than all religions in New Zealand combined.

While Christianity is still easily the largest of all religions, its ‘market share’ has fallen again.

Interestingly, among other religions, Hinduism and Sikhism are both growing at a pace; Islam is making steady gains; all other religions are falling or barely holding steady.

As an aside from the Census itself, a recent survey revealed that Buddhists are the most trusted religious people in the nation, with ‘Evangelicals’ (a politically loaded term, to be sure, but still…) ranking dead last—with Protestants slotting into the middle of the pack between ‘Atheists / Agnostics’ and ‘Muslims’.

What about Christian denominations? Again, no surprises here. Anglicans (my own denomination) are dying. At this point, the statistics are almost becoming a bit embarrassing. (Let’s be quick and thankful to add that many Anglican churches, like my own, continue to experience growth; the liberal ones that have abandoned the gospel are, generally speaking, dying.) The news isn’t particularly good for anyone, with Catholic, Presbyterian, Baptist, Methodist and Brethren numbers all taking a nosedive. ‘Pentecostal’ is the one exception, although this is less of a denomination and more of a description of how one’s Christian faith is expressed (especially in public gatherings).

It’s worth noticing that both ‘Christian’ and ‘Evangelical’ have risen sharply. If you’re a Christian and you want to find some heartening news in an otherwise fairly depressing series of stats, this may be it. We’re entering an era where institutions are becoming less important to people, but perhaps this means that more and more Christians are prepared to declare, even to their governing authorities, “my first and most important allegiance is to Jesus Christ, the Lord. I bear his name.”

So, to conclude: a half-hearted pat on the back for secularists. Well done, you. I mean, let’s not get carried away or anything: Jesus Christ is alive, he is building his church, and the gates of hell will not prevail against it. The gospel continues to grow and bear fruit all over the world, and Apatheism’s ascendancy in the West is more than balanced out by the growing number of Christian (and religious) people in the rest of the world. But you’re certainly having a good run in New Zealand. Enjoy it while it lasts.

Or, better yet, please don’t. Leave secularism behind. Follow Jesus instead. He’s real, he’s alive, he’s good, and he will never let you down.

And if you’re a Christian feeling slightly disheartened, here’s one final graph followed by a closing word: 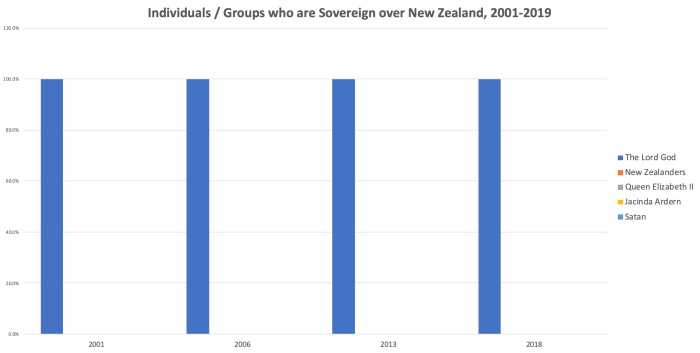 Who can fathom the Spirit of the Lord,
or instruct the Lord as his counselor?

Surely the nations are like a drop in a bucket;
they are regarded as dust on the scales;
he weighs the islands as though they were fine dust.

Before him all the nations are as nothing;
they are regarded by him as worthless
and less than nothing.

He sits enthroned above the circle of the earth,
and its people are like grasshoppers.
He stretches out the heavens like a canopy,
and spreads them out like a tent to live in.
He brings princes to naught
and reduces the rulers of this world to nothing. (Isaiah 40:13, 15, 17, 22-23)

[1] Significant delays in the process mean that the data from the 2018 Census are only just being released near the end of 2019. Three cheers for Stats NZ.